K-Swiss Global Brands decided to migrate their ecommerce stores to Shopify Plus and enlisted Guidance to make it happen. With three distinct brands (K-Swiss, Palladium, Supra), each serving three geographic regions (North America, Europe, United Kingdom), this equaled nine separate migrations. And it had to be done within two months.

K-Swiss Global Brands is the owner of three remarkable shoe brands. K-Swiss sneakers evolved from tennis court style statement to youth culture entrepreneurial inspiration. Palladium boots, steeped in aviation history, expanded into a variety of shoes so light, wearers feel like they're walking on air. Supra Footwear took inspiration from the skateboarding world and gave their shoes unique design twists. All three have something important in common: clearly defined brand personalities beloved by their fans.

K-Swiss Global Brands has been known for innovation since its founding in 1966. Formed in Los Angeles by two brothers who emigrated there from Switzerland, they combined their passion for skiing and tennis by creating the world's first all-leather tennis shoe. The idea of providing support for explosive lateral movement is a given now, but in the 1960s it was revolutionary.

It takes focus and drive to stay innovative after more than 50 years in business. Guidance had the opportunity to see their determination up close during a wide-ranging ecommerce migration project. With a contract renewal on the horizon, K-Swiss Global Brands had made the decision to let the contract with their existing provider end and convert to Shopify Plus. They brought the Guidance team onto the court to implement a winning strategy.

The eight-week deadline necessitated an aggressive schedule, one that required Guidance professionals to be on-site for 3-4 hours per day on average, nearly every day during this engagement. Failure would have resulted in enormous costs to K-Swiss Global Brands, both contractually and in the eyes of worldwide fans of its three distinct footwear brands: K-Swiss, Palladium, and Supra.

Migrating three stores on a tight schedule can be challenging. But K-Swiss Global Brands also operates internationally, with ecommerce stores serving Europe and the United Kingdom. Add the U.S. and Canada, and you have three separate currency regions (US dollar, euro, and pound). Three currency regions multiplied by three footwear brands equals nine Shopify Plus instances that had to be up and running within eight weeks. This would be one for the record books.

Missing the migration deadline would create additional licensing costs for K-Swiss. Failures or downtime with their ecommerce sites presented the potential for large losses of revenue and brand loyalty. Guidance worked hand-in-hand with K-Swiss to carefully define the scope of the project. Our mutual attention centered on the crucial items for launching one site, knowing that it would serve as a template for launching the other 8 sites in short order.

This discovery phase, during which the necessary features, integrations, and requirements were determined, was also the beginning of Guidance's intensive on-site involvement with the K-Swiss development team. The need to launch a minimum viable product in an extremely limited period of time resulted in a very agile development process.

"The daily, constant cooperation between the Guidance team and the K-Swiss team was essential…resulting in the successful on-time launch of nine sites."

Meanwhile, there was a parallel need, critical to meeting the deadline. With nine instances of Shopify Plus to roll out, we determined that the best solution would be for the nine sites to utilize a single shared code base, for maximum efficiency. We identified a powerful theme that offered extensive configuration options and could accommodate the different tracking and marketing systems required by individual regional implementations. 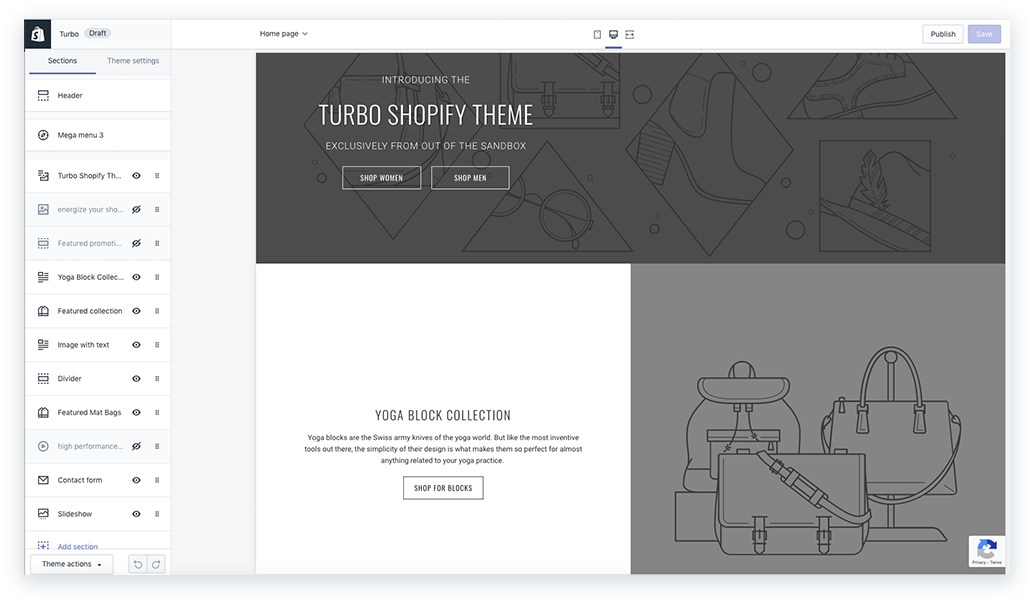 Shopify Plus allows for 100 total variants of a given product. That's usually more than enough for any fashion item. Shoes, however, are the exception to the rule. There may be a dozen or more shoe size options to offer, and multiple colorways for each size. ("Colorway" is a fashion industry term for the color choices for a given item.) When a shoe is offered in eight colorways and 14 sizes, the math says that a workaround for the variant limit is a must.

To solve this challenge, Guidance treats each colorway as an individual product, with the shoe sizes as the variants. That takes care of the product detail pages (PDPs), but if it stops there, then the product landing pages (PLPs) become overwhelming for the consumer to navigate. So Guidance coded a special solution to merchandise the colorways on the PLPs. A "default" colorway for a given shoe design is displayed on the PLP. Hovering over a shoe reveals the additional colorways available for the shoe. From there, the customer can go straight to the PDP for the specific colorway they want to see in more detail. 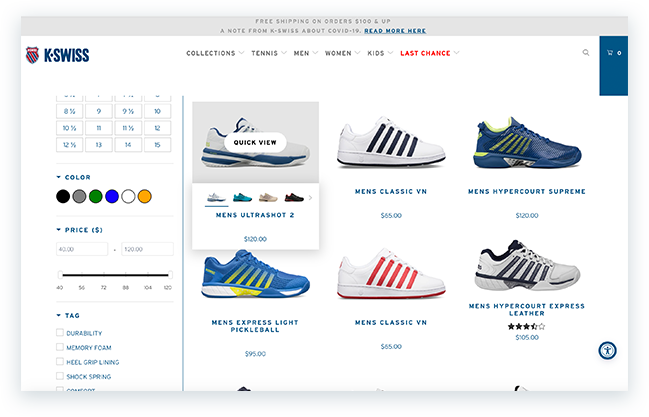 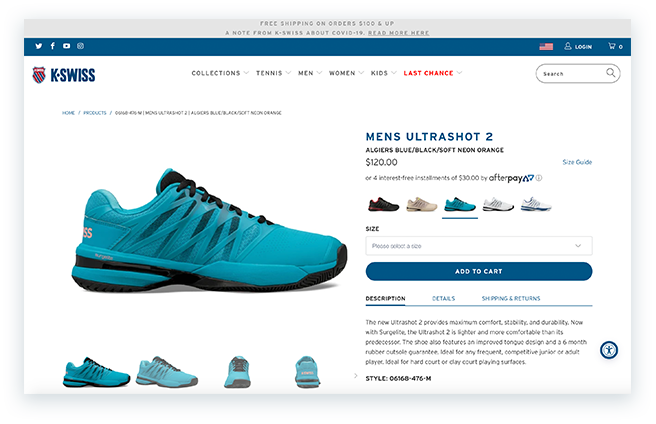 The PLP communicates to the user that there are additional colorways available for a product (Left), while the PDP empowers the user to explore each colorway option in detail (Right).

Connector technology links ecommerce platforms with enterprise resource planning (ERP) software. For their warehouses in the U.S. and Europe, K-Swiss had different processes in place, and different ERP solutions in each: SAP for the U.S., and Orliweb for Europe. The existing connector options to link Shopify Plus to their ERPs didn't meet the high-level business requirements, so a custom middleware option had to be created. The Guidance team consulted on the requirements with the K-Swiss development team; the K-Swiss team built the middleware for communication between Shopify Plus and their ERPs; and the Guidance team validated and verified the middleware and its installation.

Timing is everything, in more ways than one. Guidance and K-Swiss were working to launch the new ecommerce sites in May 2018 – the same month that the General Data Protection Regulation (GDPR) went into effect for all nations in the European Union (EU). At the time, the United Kingdom was also a part of the EU, so six of the nine ecommerce instances had to immediately comply with the strict data privacy guidelines and requirements of the new regulation.

Developing a common code base that was configurable enough to differentiate the brands across multiple currency regions was a challenge. Adding to that challenge was the need for affiliate linking that differs per region, per brand, in the same code base. Those challenges were solved, too, so that the brand presentation was exactly what customers expected it to be. Supporting the fulfillment of customer expectation also meant installing a GeoIP-based selector to allow customers to change their region or language when desired. 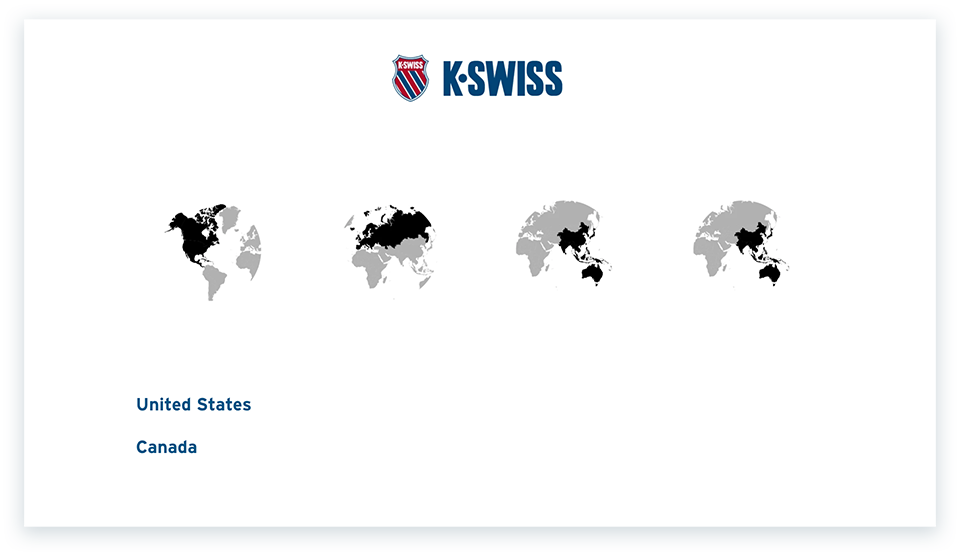 ONE DOWN, EIGHT TO GO

Launching nine ecommerce sites in the space of eight weeks is a tall order. And while that's true, it's not the whole story. The minimum viable product wasn't just an ecommerce website with only the must-have features – it was one ecommerce website. The solution Guidance and K-Swiss developed to encompass all nine ecommerce sites had to work in a live environment on one site before the rest of them could be confidently deployed. The U.S. version of the K-Swiss brand's site was the test case, and was launched in five weeks, without any critical functionality issues.

With the first site implemented successfully, the next task was to repeat it – eight times, within the remaining three weeks, for the other brands and across all three geographic regions. Working side by side with the K-Swiss development team, all nine sites launched on time, with no downtime affecting revenue generation, while also accomplishing the core goal of reducing their operational costs.

Guidance re-platformed nine ecommerce sites to Shopify Plus within 8 weeks, reducing code base complexity while allowing for flexible brand presentations.

For a successful outcome, Guidance consulted on the requirements of custom middleware solutions. Guidance also validated their development and connections from Shopify Plus to separate ERP providers in the U.S. and Europe.

The result is a set of nine total ecommerce site migrations completed within eight weeks. The sites work from a single shared code base as their foundation, and yet the implementation is flexible enough to accommodate multiple brand personalities, regions, currencies, and tracking and marketing systems. 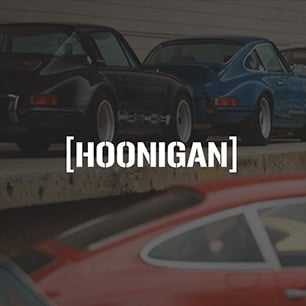 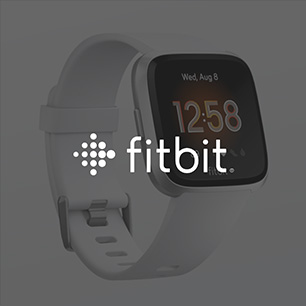