January 05, 2009
Home/ Press /One-third of Online Shoppers Encountered Glitches this Holiday Season, New Guidance Survey Reveals
Some 64 Percent Shopped Online Without Incident – While 37 Percent of Those Online Didn’t Shop the Web at All 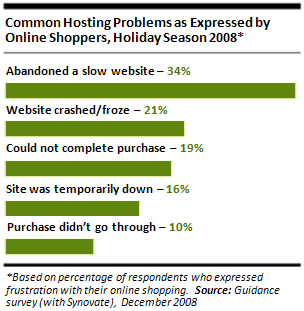 MARINA DEL REY, Calif. - January 5th, 2009 - In what may have been the most closely-watched holiday shopping season in the short history of the online medium, some 36 percent of online shoppers ran into roadblocks en route to buying that gift – ranging from molasses-like website response to fruitless efforts to check out, to outright system crashes.

That’s the principal finding of a new nationwide survey from Guidance, conducted through December 23. In association with Chicago market researcher Synovate, Guidance asked 1,000 online consumers, “When you think of online shopping this holiday season, which of the following have you had issues with?”

The findings come amid a dramatically weakened economy, declining brick-and-mortar retail sales, a shortened holiday shopping season – due to a late Thanksgiving – and uncertainty about whether online shoppers would pick up the slack.

The Guidance/Synovate survey revealed that 64 percent of shoppers completed their purchases incident-free. At the same time, 37 percent of those online skipped Internet shopping altogether, a small percentage of whom reported doing so because of problems in the past. Of those who reported trouble this year, 13 percent said they had to abandon a very slow website while they were trying to shop, 8 percent said a website froze or crashed altogether, 7 percent could not complete a purchase on their first attempt, 6 percent tried to access a website that was down temporarily and 4 percent said a purchase they thought they had completed actually didn’t go through.

“While online shoppers may have escaped the ferocious winter weather, a significant number didn’t elude the issues that tend to afflict overburdened, under-engineered eCommerce sites,” said Jason Meugniot, Guidance CEO and Owner. “Ideally, every shopping cart that is not abandoned by the shopper should be converted – and every one that doesn’t sends a message to the consumer. Uptime, speed and reliability ought to be prerequisites of the online shopping experience. Still, I’m heartened by the success that many online shoppers enjoyed, especially since deep discounts, special offers and free shipping/returns made online shopping a better value than ever this season.”

Among the survey’s major findings:

Guidance has been designing, developing, hosting and managing eCommerce websites for clients since 1995.

“Keeping an eCommerce website up and running smoothly requires more than simply lining up enough servers,” said Meugniot. “Retailers need application support for the database, the eCommerce apps and the website itself – and a partner that understands how everything works together. Finding an experienced and reliable hosting and managed services provider is vital, to make sure retailers capture every transaction and keep customers coming back for more.”

The Guidance/Synovate survey has a margin of error of +/- 3 percent. For a full copy of the survey results and a graphic presentation of top-line data, email press@guidance.com.

About Guidance
Since 1993, Guidance (www.guidance.com) has helped companies seize opportunities and solve problems through the innovative and practical use of technology. Guidance designs, builds and maintains eCommerce websites for retailers that are pure-play online or multi-channel – creating captivating experiences so consumers will buy more, come back often and value greater engagement with the retailer. Guidance's systems facilitate $500 million in online sales every year. Members of the Guidance team are seasoned professionals, passionately committed to providing technical leadership and powering ingenuity. Key clients include Foot Locker, GEARYS Beverly Hills, Relax the Back, Salvation Army, and many others. Partners include: Microsoft, AspDotNetStorefront, Mediachase and Telligent. Guidance is based in Marina del Rey, Calif.