April 01, 2011
Home/Insights/Meet Terry -- This Week's Featured Employee
This week's Featured Employee is Terry, one of our ColdFusion developers and part of the very talented team behind the sites for the world’s largest retailer of athletic footwear and apparel. A devoted father of two, Terry’s jovial personality sure is infectious. We asked Terry to answer a few questions for us, here's what he said:

What’s your title?
I am a Senior Associate.

How long have you been at Guidance?
Since May 2008.

Tell us about your hometown.
I was born in Mainland China, but moved away to Hong Kong when I was two years old. Although it was very crowded, with tall buildings all around us, we managed as kids to play soccer in the hallways while wearing sandals. I also enjoyed playing table tennis and trading cards. One thing though -- while Hong Kong is people-crowded, Los Angeles is certainly car-crowded!

What city do you currently live in?
I live in Alhambra, about 25 miles from Guidance’s offices in Marina del Rey. I lived in Missouri when I was an exchange student during my Senior Year in High School and later when I attended Missouri State. When I graduated, I wanted to find a city that had authentic Chinese food and Alhambra not only has that, but a large Asian culture, too, which I enjoy.

How did you decide on this career?
When I was sixteen, my parents asked me if I wanted a computer. Up until that time, I knew very little about computers. Once I started using my new computer, I became very curious as to what makes computers operate. So I took some basic operation classes and then I majored in Computer Science. I’ve always thanked my parents for that first computer.

What was the oddest job you ever held?
I once worked at my wife’s office (before I married her) and the Sales Manager’s son was hired in as the Tech Support employee. He knew absolutely nothing about computers, so I was always helping him out, but couldn’t say a word…

What do you like most about working at Guidance?
The people at Guidance are really nice and helpful. When I first started working here, they immediately invited me to lunch and it’s been like that ever since, making me feel very welcome. I also appreciate the support we receive with tech training.

Here's a photo of Terry at work! 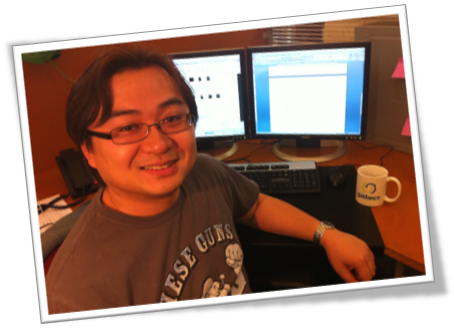