How long have you been at Guidance?
About 6-and-a-half years, the longest I have ever worked at one company.

Tell us about your hometown.
I was born and raised in Chicago, Illinois. My younger years were spent on the West side in the Logan Square area and the summer before 8th grade, we moved to the North side, within blocks of Lake Michigan, to an area called Rogers Park. I felt like The Jeffersons, who were "movin' on up." Everyone knows Chicago as the "Windy City", but that's not because it is actually windy. The nickname was given because of the city's blowhard politicians. I actually find Southern California to be much more windy, particularly during Santa Ana conditions.

What city do you currently live in?
Santa Monica, California

How did you decide on this career?
I've always been a stickler for detail and organization, and genuinely enjoy helping people. I used to spend hours as a kid untangling my mom's jewelry and sorting it for her, organizing her shoes (and she had many!) as well as her knitting needles and yarn, only to check back a couple weeks later and find they all needed sorting and untangling all over again. I loved it. Being an executive assistant was a no-brainer and I knew in High School what I wanted to do after I excelled at a typing class (yes, with a real, old-fashioned typewriter!) and developed a strong relationship with my teacher. Becoming an Office Manager has been a natural progression and I enjoy the challenge of wearing many hats and tackling new issues.

What was the oddest job you ever held?
I haven't had any odd jobs to speak of, but one job during High School was at the first McDonald's "Townhouse", where the motto of our manager, an ex-Chicago police officer, was "if there's time to lean, there's time to clean." That was one super clean McDonald's! I even served Ray Kroc (then owner of McDonald's) one day, and refused to give him French fries because the freshness timer had gone off, even though he asked me to give them to him anyway. I explained to him that we only served the freshest fries and there would be a new batch ready in just a moment. He was thrilled that I didn't give him the fries and went and told my boss. And that's when I found out who he was! I passed the test.

My first job upon graduating from High School was Receptionist for the AMerican Academy of Periodontology in Downtown Chicago. They told me I got the job because I was able to pronounce p-e-r-i-o-d-o-n-t-o-l-o-g-y!

What do you like most about working at Guidance?
There are many things that I like about working at Guidance. First and foremost, though, is the feeling of belonging. Guidance is like a family and it's easy to feel welcome and fit in. There are no "clicks." Everybody is on equal footing here, with opportunities for recognition and advancement. It's close to home, too, allowing me flexibility for my family, and it's also a fun-but-professional environment. 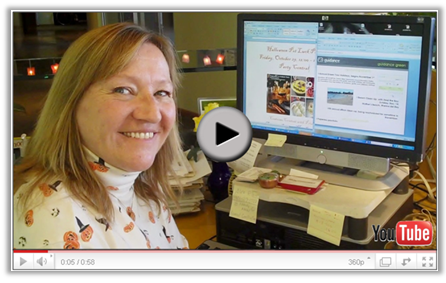